And now, we begin Part II of our 3rd Annual Customer Showcase. It's always gratifying for us to see how our effects work in the field, and we hope you enjoy seeing their uses, too!

First up is the LA Live Steamers Ghost Train in Griffith Park. It's one of our favorite haunts in the Los Angeles area. We created a custom effect for them 2 years ago, and they also use a lot of our effects in various ways. Each year we've been, the highlight of the train ride is centered in a big turnaround towards the end of the experience, and it's different every year. Imagine our excitement to turn the corner and see Electric Specter conducting a Tesla Coil concert (beginning around 14:45 in the video)! This is the coolest use of Electric Specter we've seen yet. You will see quite a few Spectral Illusions effects throughout the nearly 20 minute ride. They also used the audio portion of Waking the Dead in their amazing animatronic tree before the train starts moving (around 3:00 in the video). Thanks to the LALS Live Steamers for their always amazing attraction!

Rick Reiss created a Haunted Pirates den at his home in Temecula, CA. Part of his display was a Pepper's Ghost Accursed Helmsman. He really did a great job with it! He says, "The video of the pirate skeleton provided an excellent touch to our haunt, and we had lots of trick-or-treaters and neighborhood visitors...Thanks for providing your outstanding video products." He also provided a time lapse of his Halloween night! Looks like a great turnout!

Finally, one of the most elaborate home haunts we've see is from Howard Brightman in West Los Angeles. It nearly defies description! He has built an elaborate facade of part haunted house, part castle which incorporates various props, a hearse, and several Spectral Illusions effects. Once you enter the house, you will see the sheer volume of work put into the place. Every corner, nook and cranny (including the air conditioner vent) is themed and decorated, from a Halloween Village display to a multitude of candelabra hanging from the ceiling. The living room window overlooks a spooky graveyard, otherwise known as Ghosts in the Graveyard. He has a representation of all of the major Universal Monsters, from the Invisible Man near the entrance of the house to the Creature from the Black Lagoon in the backyard pond. Spectacular! 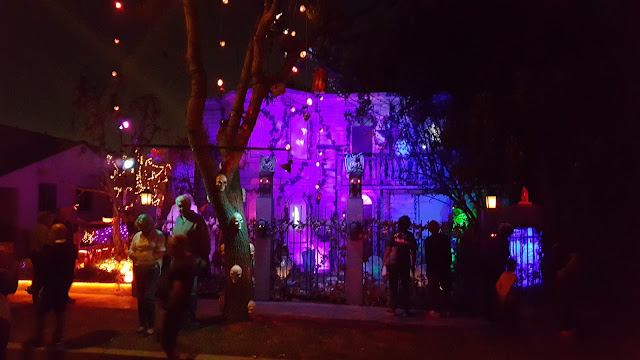 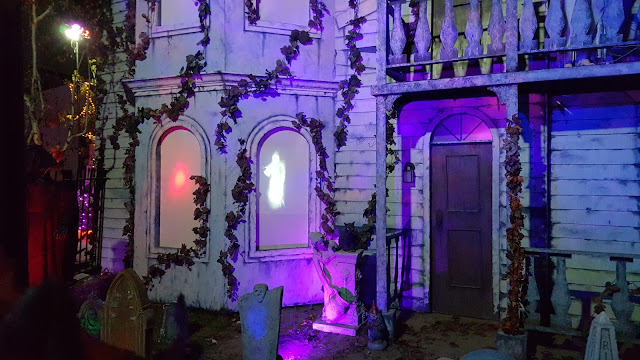 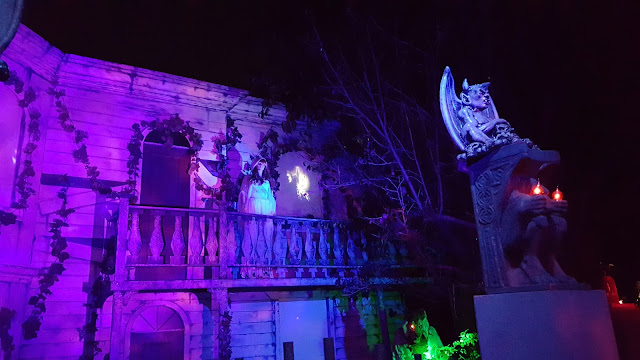 Thank you to everyone who submitted their pictures and videos! Every year, this has been a particularly fun feature to put together, not least because we get to see what you do with our products. We're looking forward to another great Halloween next year! Now get to planning!
Posted by Spectral Illusions at 1:22 PM No comments:


Halloween is done. The props are back in their storage place (well, most of them), and kids are thinking more about sugar plums than costumes. All that means is that it's time to start planning for NEXT year! So, for a little inspiration, here are some great videos and pictures of haunts that used Spectral Illusions effects in 2015.

First up is Faith Landsman from Bluestocking Farm in Burbank, CA. She used Phantom of the Park, rear projected in a window. 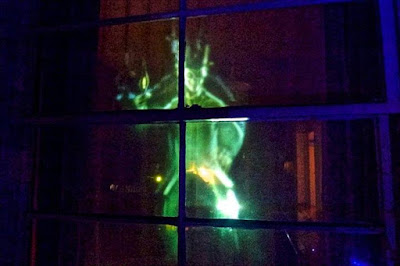 Next up is a great charity haunt in Anaheim that we featured on our blog a few weeks ago. Motel 6 Feet Under is an actual maze that you can really get lost in. Additionally, all proceeds go to BOO! Building Occupational Opportunities, and they help train people to work in theatrical environments while creating a fantastic haunt. A review from WestCoaster.net has some great pictures, including one featuring Restless Spirit. This is a 360 video from Horror Buzz, also viewable in Google Cardboard. You can scroll around as you watch (look up high for Restless Spirit and Electric Specter).

Richard Yates of Mission Viejo, CA, who submitted a fantastic Daisy last year to our 2nd Annual Customer Showcase, sent in this video and a picture of Ghosts in the Graveyard and Waking the Dead in action in his Dead Zone Graveyard.

Chris Gonzales sent us this video of Restless Spirit in his window.


Missi Hickam of Casa de Muertos in Valencia, CA sent us a picture of her yard haunt. She also used Ghosts in the Graveyard. Looks pretty great!
That's not all! We'll have more coming in the next couple of days! If you would like to be featured, but haven't yet sent in pictures and/or video, there's still time! Send links and pictures to info@spectralillusions.com!
Posted by Spectral Illusions at 3:43 PM No comments:

If you happen to find yourself in Melbourne, Australia this Halloween, we would like to recommend a trip to Spooktober. They have two haunts in two locations. The first is the Haunted Manor, located in the St Kilda Town Hall. They are a kid friendly Halloween Trail, suitable for ages 6 and up. At least until 8PM! Then the lights go down for a spookier, but still family friendly event, recommended for ages 10 and up. There will be a large Spectral Illusion there, too! Asylum Haunted House is far scarier and is strictly 18+, located near Wesley College. Tickets are available online and at ticket booths if the event isn't already sold out.


Posted by Spectral Illusions at 10:31 PM No comments:

Starting this weekend is a yard haunt in Valencia, CA called Casa De Los Muertos! We are told they will have Ghosts in the Graveyard running as well! Go check it out if you're in the area!


Rotten Apple 907 opens this weekend, running October 24, 25, 30 and 31 from 7-10 PM. It is one of the most intricate yard haunts we've ever seen. They are amazing at design and allowing for the maximum amount of maze in a yard that we've seen. What is even more unbelievable is that they change their theme nearly every year! This year, they celebrate their 25th Anniversary with Rotten Apple Hollow, a western themed haunt, and you may see some Spectral Illusions around! Admissions are free, but they do take donations for the Burbank Temporary Aid Center, which provides a Food Pantry; sack lunches, showers and laundry for the homeless; medical assistance; and other services for those in need. Please go see this haunt if you're in the Burbank, CA area!

Posted by Spectral Illusions at 9:44 AM No comments:


One of our favorite haunts in Los Angeles is the LA Live Steamers Ghost Train in Griffith Park. It is a 15 minute or so ride through a variety of scenes and themes. It is kid friendly, as long as they meet the height requirement of 34". The LA Live Steamers is a Railroad Museum and exists solely on donations and this is their primary fundraiser for the year. It's a great place to go even when it's not Halloween. They have exhibits including Walt Disney's Barn moved to the property from his home where Walt, himself, worked on his personal railway. The Ghost Train is open October 16, 17, 18, 23, 24, 25, 29, 30, 31 and November 1 from 7-10PM. Tickets are $15. It gets busy, so be prepared to wait. The line also usually calms down around 9. There are lots of great effects going on throughout the ride, including a large proportion of Spectral Illusions effects. We also created a custom effect for them, seen above. Enjoy your ride! There's no light at the end of their tunnel!


Motel 6 Feet Under is an actual maze. It could take 20 minutes to walk through, or longer if you get lost in the depths. There's creeps and scares around every corner, too! Even some of our Spectral Illusions effects! It is located in the Anaheim Business Expo Center, right across the freeway from Disneyland. It is on several Must See Haunt lists for Southern California, and it looks like it's going to be a great attraction! Additionally, Motel 6 Feet Under has a non-profit arm called BOO! (Building Occupational Opportunities). Their goal is to provide job training in the fields of theatrical arts construction for underserved adults. It's a great opportunity to be scared for a great cause. They open tonight, October 9 and will be open Thursday-Sunday until November 1. Ticket booth hours are 7-10PM Thursdays and Sundays, and 7-11PM Fridays and Saturdays